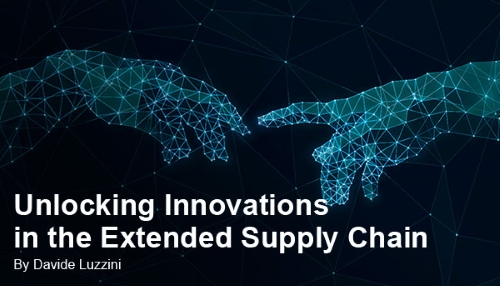 Companies must innovate if they are to thrive, but how do they find the “uncut diamonds” in their business ecosystems or extended supply chains that can be turned into revenue-earning gems?

Finding new ideas and prototypes that might become viable products has never been easy. The increasing complexity of supply chains, the blurring of boundaries between markets, and the accelerating pace of change have made the task even more difficult. Certain organizational challenges must also be navigated. For example, companies need to be ambidextrous; they have to exploit the capabilities and resources they already possess, while also exploring new avenues of innovation.

The supply chain or procurement functions are becoming increasingly involved in finding and developing product innovations. These disciplines interface with the extended supply chain, and hence are in a unique position to find undiscovered gems.

The Zaragoza Logistics Center (ZLC) has initiated a research project to make the task easier. The project is exploring how companies can identify, access, and exploit unfamiliar but complementary assets, that have the potential to create sustainable growth in fragmented business eco-systems.

The first step in the research was completed recently: a case study of a European beverage company that identified a novel type of vending machine as an innovation that could provide a new distribution channel and another revenue stream for the enterprise.

These machines can be installed in educational buildings, sports centers, shopping malls and offices, and communicate with consumers through a mobile phone application. Customers can order and pay for their drinks via their mobile phones or interactive displays on the machines, which dispense customized healthy beverages that minimize the use of water, energy and plastics.

The concept of a “social” vending machine had already been discussed within the company when it was contacted by a start-up venture that had built a prototype. It was impressed by the prototype, and the start-up appeared to have the requisite software and hardware expertise to bring the concept to fruition.
Despite some concern over the start-up’s financial health – a critical factor since customers would use apps to pay for the drinks they ordered – the company signed a commercial deal that required the start-up to develop and deliver a fully functional prototype machine.

In the beverage company the marketing department led the product development team, which also included R&D, Legal, Quality Assurance, Production, and Purchasing. To streamline the process, a marketing person was designated as the point of contact for the founder of the start-up venture.

The project progressed to the next stage: a contract for 10 machines. The start-up enterprise appointed a third-party company to assemble the machines. After overcoming some technical issues, the team’s efforts appeared to be nearing success, and a number of pilot test locations were identified.

Maintenance and service issues emerged during the pilot; using the company’s sales team to re-fill and check the machines was not tenable and outside support was hired to do the work.

Although the pilot took more time than expected, it was a success and the machines met the company’s performance targets. However, moving to the next level required the parties to solve one persistent problem: the machine’s price was too high. The start-up’s quote did not bring the cost down sufficiently, largely because its speciality was software – not hardware manufacturing. Finding an alternative supplier proved difficult because of the low volumes involved, or contract manufacturers baulked at the investment required.

The company faced some tough decisions. For example, should it take on the role of hardware integrator or find a suitable supplier? What is the start-up’s continuing involvement, and will the innovation deliver the benefits originally targeted?

Based on observations from this case study and other initial research, we have pinpointed three key challenges that practitioners must address when looking for innovations that could become generators of revenue.
The first is how to identify and select assets in the extended supply chain that are both unfamiliar and complementary. This happened almost by chance for the beverage company in the case study, in that the start-up made the connection via mutual contacts.

Secondly, how are these assets turned into profitable products within a company’s existing business eco-system or extended supply chain? The beverage company developed a new network to build the prototype and vending machines for the pilot program.

Thirdly, how do you “freeze” the new architecture you have created to capture value from the innovation on an ongoing basis? This challenge became a difficult test for the beverage company, when it discovered that the start-up it had collaborated with could not deliver the new vending machine at a viable price. Deciding what role early stage partnerships should play in the future of a new product – if any – is a dilemma that many organizations grapple with.

In addition, an overarching challenge that has become much more important over recent years is how to develop economically viable innovations that also meet environmental and social sustainability goals.
In the next stage of our research, we will explore multiple case studies of companies that have developed innovations they have identified in their external networks. These projects can involve a broad range of actors, including – but not limited to – suppliers and customers.

Davide Luzzini is an Associate Professor at ZLC. This project is conducted in collaboration with Jury Gualandris, Assistant Professor at UCD (University College Dublin), and Hervé Legenvre, MBA & Research Director at EIPM (The European Institute of Purchasing Management). For more information on the research contact Davide Luzzini at: [email protected]