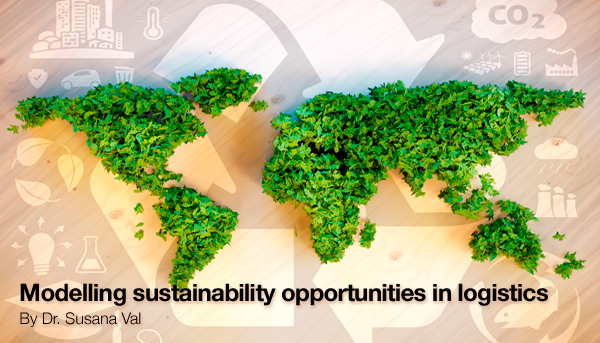 Major companies are increasingly aware of the need to evaluate, and reduce, their GreenHouse Gas (GHG) emissions, for commercial, regulatory and reputational as well as ethical reasons. Generation of CO2 and other GHGs through the Product Life Cycle – material extraction and transformation; manufacturing processes; where appropriate, energy use in service; and emissions from end of life disposal – are well understood. There are agreed methodologies and protocols, and the resulting values are essentially invariant for a given product.

This is not the case for GHG emissions arising from supply chain operations. Identical products have widely differing carbon footprints depending on the locations of sources, distribution centres and customers, the way logistics operations are carried out, the choice of transport modes and the nature and length of routes. For many consumer goods, the environmental impact of supply chain operations far outweighs that of manufacturing (and transport represents 50-60% of supply chain emissions) so there are significant opportunities to reduce GHG emissions by making changes to the supply chain. Although a Global Logistics Emissions Council Framework, and the Greenhouse Gas Protocol on which it is partly based, has been developed with major multinationals worldwide and was launched in 2016, use and acceptance has been slow.

Towards their Masters Degrees, ZLC students Gala Priscilla Andrade and Maria Fernanda Barragan have been working with a European multinational in the pharmaceutical sector to develop a dynamic model of supply chain emissions (and costs) which can inform future transport and logistics strategies and decisions. This would contribute to an existing Corporate Social Responsibility policy, and inform decisions around a pending greenfield project. The company perceived an opportunity to be a pioneer in CO2e (Carbon Dioxide equivalent) emissions calculations, and to create a strategy that would differentiate itself from its competitors.

The study focussed on operations out of three warehouses, in Ireland, Denmark and France, and sought to model and simulate the CO2e footprints arising and the effects of possible changes that would reduce emissions. While in theory reducing emissions through more efficient use of fuel, transport and storage assets should also reduce costs, the relationships are not straightforward: nor, because of differing energy costs, duties and regulations, are those relationships necessarily uniform. So the model needs not only to suggest means of improvement but also to answer questions such as ‘Should the company focus be investing on reducing emissions, or on reducing costs’, or ‘Can the company reduce emissions at the same cost by changing transport modes, or by changing operational activities?’.

As with most distribution operations, the bulk of GHG emissions are generated by ‘Scope 3’ activities. Scope 1 covers emissions from the organisation’s own activities such as on-site fuel use for heating or lift trucks, air-conditioning leaks etc; Scope 2 represents emissions from generating bought-in electricity. Scope 3 covers the emissions from operations such as transport (much the most significant), dockside activities, waste, water treatment and so on, which are not owned or directly controlled by the organisation. That matters because assessing these emissions depends on gaining visibility of information held by third parties (assuming the latter actually possess the relevant data).

In the model, which was developed in Excel, the main ‘units of account’ for the warehouse include consumption of fuel, refrigerant, energy (electricity) and water, each with an appropriate emission factor, for example kg CO2e/kg fuel. For the transport/route analysis, the metrics are total tonne-kilometres to which are applied factors for fuel efficiency (kg fuel per tonne-km), fuel emission (kg CO2e per kg fuel) and CO2e intensity (kg CO2e per tonne-km), these factors all varying by mode, fuel type, equipment efficiency and so on. The model also considers ‘Well to Wheel’ (WtW) consumption and emissions – that is the sum of Tank to Wheel, the fuel actually used in operations (vehicle or otherwise), and Well to Tank – the additional emissions from upstream fuel production and distribution. Necessarily, many of these are estimated rather than measured values, but only by including them can values for the total CO2e of a shipment be approximated.

The model also included a detailed cost analysis for both warehousing and transport.

Reassuringly, after incorporating data supplied by the main 3PLs, the model values for CO2e emissions by mode were very close to the estimates the company was already using, and which had allowed it to reduce emissions by 4.3% in a year, principally by ceasing to consider air freight as a standard transport option. The CO2e figures come out at 3.5 g/t-km for sea, 40 g/t-km by road, and 568 g/t-km for air freight.

The study revealed significant differences between the three warehouse locations, some expected and others less so. Within a total CO2e emission of 1,871.5 tonnes in a year, Ireland accounted for 1225 tonnes, and for each location transport was responsible for over half of total emissions, 91.8% in Ireland – this reflects the number and length of tradelines served from Ireland. For all three countries, air freight represented between 85% and 92% of WtT emissions.

Using the model the company can visualise emissions in detail by warehouse location and transport mode, and rank the priorities for improvement by tradeline and origin country. The company can see that optimising the system for emissions also contributes to cost savings. By pioneering logistics sustainability in the pharmaceutical sector there may be a distinct marketing advantage, and the company would be well placed to address increased regulation around sustainability, and take advantage of any relevant eco-accreditation schemes.

The approach taken with this model could readily be applied by companies in many other sectors.