Production planning in an uncertain world 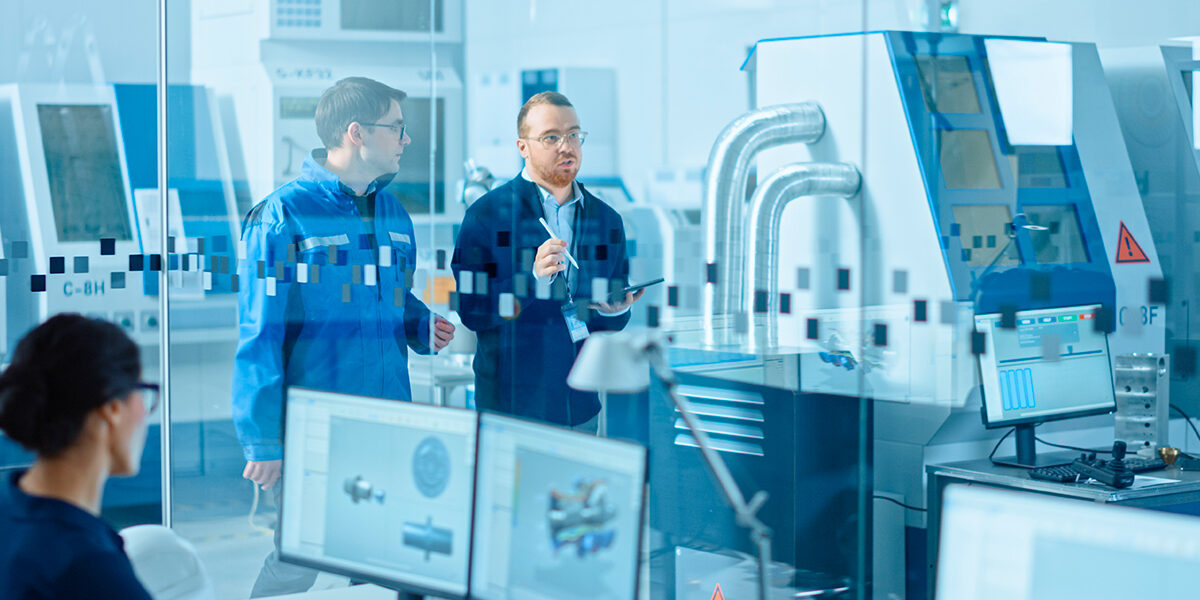 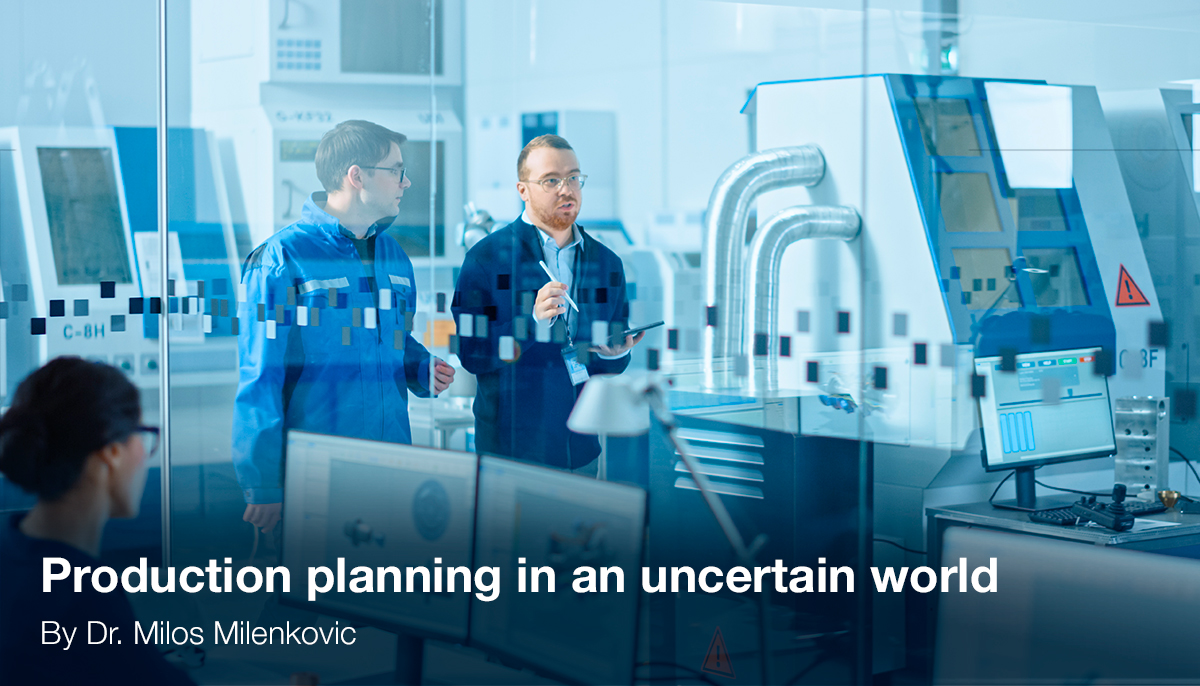 ‘It’s tough to make predictions, especially about the future’. This insight is variously attributed to the baseball ‘philosopher’ Yogi Berra, the Hollywood mogul Sam Goldwyn, or the author Mark Twain, but its truth is recognised by many manufacturing companies. Production plans are based on the best information available at the time, but much may change before tool meets material.

One technique for creating production plans and schedules that will be more robust in an uncertain world is to use Sequential Decision Analytics, and this is the approach taken in an award-winning thesis by three ZLC students – Anzar Kamdar, Rolando Fuentes Ruiz, and Valeriya Shevtsova.

SDA is applicable across a vast range of problems where an initial decision, say a production schedule, based on the best available data is outdated by new or revised information. A new or modified decision is made but this in turn may experience, or even trigger, another change in one or more of the input conditions. And so on. Potentially for ever except that at some point we have to ‘freeze’ the plan and actually make something!

SDA involves creating a mathematical model with five crucial components: the physical state of the system to be optimised; the initial ‘decision’ (the production plan, for example, based on currently available data); the new or updated information that has become available from outside (exogenous information); a transition function that describes how the system changes over time; and an objective function that captures the specific contribution or performance measure(s) for which the system is to be optimised – which might be cost reduction, profit, risk, or environmental impact.

The initial ‘decision’ is arrived at according to a predetermined ‘policy’ that is expected to best achieve the objectives. There are two main approaches. ‘Policy search’ is historically based and involves looking over the class of applicable policies and finding the one that appears to work best over time. Alternatively, we can use a ‘look ahead’ approximation, which involves estimating the likely impact of the current decision on future performance: the cost of making the decision now and the likely future impact across the range of possible values that constitute the uncertainty around the values of critical factors in the future.

This particular study involves a Portuguese pod for vehicles, and in particular a part of the process that involves a heavy electricity consumption in mixing machines and the associated extruders. The company had until June last year enjoyed a fixed price contract for electricity, but that has now ended. Although the company can in optimal conditions generate up to 25% of its electricity requirements from its own photovoltaic installations, it is largely dependent on buying in the Iberian spot market, MIBEL, where prices are both significantly higher than the company has been paying hitherto – an average increase of 200% on 20-21 prices paid – and, perhaps more significantly, extremely volatile on a daily or even hourly basis (up to 1,900% has been seen on the peak hourly rate).

That is one source of uncertainty. The other is that there are around 250 products in the company’s range, imposing differing demands for capacity and energy on the mixing machines and extruders, but the company is essentially a Make To Order operation, so visibility of future demand at product level is limited and there is no formal production planning or optimisation process – another source of uncertainty. But the desirability of optimising the production process to minimise electricity costs is evident.

The company has mapped its processes using Multi-layer Stream Mapping (based on Value Stream Mapping) which enables them amongst other things to track energy use at each production stage and to track any variability between shifts. This formed the basis for the analytical modelling – nonetheless, stitching together data from a variety of internal and external sources to form a combined view of the overall production supply chain was not without its challenges (and in the event, due to gaps in the data, a system of two mixing machines, rather than the three in real life, was modelled).

Three models were created. Model 0 is a purely historic view of past decisions and their outcomes to act as a baseline. Model 1 represents an idealised world in which energy load shifting minimises electricity costs on a monthly basis, but without regard to any other production considerations. Model 2 deploys the SDA framework with the five elements noted above. The significant ‘state’ variables, which describe the initial state of the model, included inventory levels; product demand (on a deterministic, weekly, basis); electricity spot market prices (MIBEL is essentially a ‘day-ahead’ market, pricing hour by hour, although there are many side deals, swaps and hedges available); ‘beliefs’ – best estimates of anticipated outcomes such as yield, electricity consumption, manufacturing time per unit of product; and photovoltaic energy production – which is essentially the weather forecast.

Model 2 includes exogenous and transition functions to demonstrate how they fit, but these are not ‘live’ in the developed model – that would really require a real life implementation.

Running the models yielded some impressive results. Model 1, the pure load shifting model, yielded electricity cost savings of 10% over the ‘historic’ Model 0. Model 2, the deterministic model integrating production planning, inventory cost and energy cost, showed a superior electricity cost saving, 11.7%, and a reduction in average inventory holding value of 58.14% which with annual holding costs assumed to be around 20%, is also significant. The while, sales levels are retained (to five figures of decimals).

This is encouraging, and there are natural routes for expansion of the model. In particular, there is the possibility of allocating the more experienced/efficient shifts to the most energy-expensive times of day (with a typical 20-40% difference in prices between the 6pm to midnight, and midnight to 6am, shifts, even minor variations soon add up). There are also possibilities for exploiting arbitrage on the energy market, especially given the company’s own PV generation capacity. However, it would be important not to outstrip the company’s capabilities – nasty things can happen on the markets!

The logical next stage would be to develop a Model 3, including stochastic modelling elements to optimise expected values given risk and uncertainty in various parameters. This could be based on leveraging future-facing forecasts as they become available. (In theory this could be a continuous process or as continuous as the frequency of observations allows: in real life of course, the plan does have to be fixed at some point, or nothing ever gets made).

One could also take a ‘Monte Carlo’ approach (which involves assigning random functions to each uncertain variable, generating sets of scenarios with optimal solutions. These can be used to generate frequency tables which show how often a particular solution element is part of an optimal outcome). Testing such a model would, though, require either live field testing, or at least the development of an online simulator, neither of which was within the scope of the current thesis.