“Zaragoza is not Singapore, but it is successful in logistics”

Home > News > “Zaragoza is not Singapore, but it is successful in logistics” 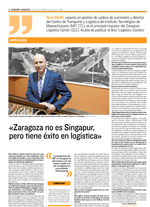 Yossi Sheffi, expert in supply chain management and director of the MIT CTL, is the main promoter of the Zaragoza Logistics Center (ZLC). He has just published his new book ‘Logistics clusters’.

In your book, ‘Logistics clusters’, you say that Zaragoza is a city ‘in the middle of nowhere’. Do you think that despite that description, the city can be important in logistics?
It already is. Plaza is the largest logistics park in Europe. One of the main incentives to write this book was that, despite the unlikelihood of succeeding in logistics, Zaragoza has managed to exceed all expectations, with the obvious disadvantages of a small airport, relatively isolated from any large cities such as Madrid or Barcelona. I was therefore very interested to see how clusters work.

You talk about Zaragoza’s success in logistics in your book, but you don’t put it on the same level as Memphis, Singapore, Chicago, Rotterdam or Los Angeles. What has to be done to achieve that level? In fact, is it even possible to achieve it at all?
No. The answer is no. That is why the success of Zaragoza surprises me so much. If you think of Singapore, Los Angeles, Chicago, Sao Paulo, Panama… These cities are strategically located, but Zaragoza has been successful despite its location. It is true that it is at the crossroads of four major Spanish cities or regions, but that only makes it strong within the Spanish market. It is very difficult for Zaragoza to be a reference for world trade, but it can be a key center of knowledge thanks to Zaragoza Logistics Center (ZLC), with many students coming from all over the world and all the research carried out, etc… Trade can be improved but Zaragoza is not a port like Singapore with cargo ships arriving, but it could liaise with Valencia Port. It cannot be compared to Panama either, where half of the world trade passes through its canal. So it is admirable that Zaragoza is successful without this strategic advantage.

Don’t you think that Zaragoza got lucky?
No.

I mean. Even the people from here did not believe in the logistics success of Zaragoza until Inditex came. That was critical.
Only those who worked to bring Inditex know if it was luck. It took a lot of work and negotiation on the part of the Aragonese government at that time. The team of Carlos Escó and Javier Velasco worked very hard to bring Zara-Inditex, which is a worldwide leader in logistics and not only in Spain. It is one of the best corporations in the world.

In this case, the intervention of the public power was key. In other parts of the world the influence of civil society is bigger and does not depend that much on the government.
When I talk about logistics success in different parts of the world, clusters show how important the public-private cooperation is, because businesses always need infrastructures, appropriate regulations and good laws. The government plays a key role in logistics activity.

That does not happen in other sectors.
It is different in other sectors, yes. Look at the Port Said, in the Suez Canal. In other places in the area there weren’t any agreements to facilitate what happened there. In Singapore or in China it is easy because their governments decide that something has to be done and they do it. One of the main things about Zaragoza is that the whole civil society was involved: the two main political parties, the City Council and the Government of Aragon, the unions and the banks.

How important is the fact that companies from the same sector work together, in this case in clusters?
The majority of the cluster, if we look at Silicon Valley, Hollywood or Wall Street, work together to deal with vendors, to have more power with the local government to get the best possible regulations, etc. In logistics there are agreements that allow reduced common transport costs, because transportation companies can use bigger planes, larger ships and longer trains. The service also improves as the frequency increases. Everybody wins.

Is this the future? Should corporations work more in clusters instead of in employer organizations? The European Union supports this.
The German government has developed ten clusters, funding each of them with half a million euros. Logistics is one of them. Five universities, 120 companies, a lot of money to make a strong cluster. This is a way of doing industrial politics. It is so much more than just making investments.

How important it is today to have educated people in logistics? This discipline is more recent than others.
Yes. This is not Physics, Mathematics, or Economics. Logistics and Supply Chain Management have become extremely important in the last 25 years, partly as a result of globalization and also the outsourcing processes. Companies like Apple or Cisco do not manufacture anything at all. It is true that they find somebody else to do it once they finish the designs, but then the important part of the business is logistics.

So there we have the Zaragoza Logistics Center, the first center of MIT abroad.
Zaragoza was the first and now we have other (centers) in Bogotá and Kuala Lumpur. The experience in Zaragoza has been a good one, which is why we have created a network. Logistics is, by nature, an international profession.