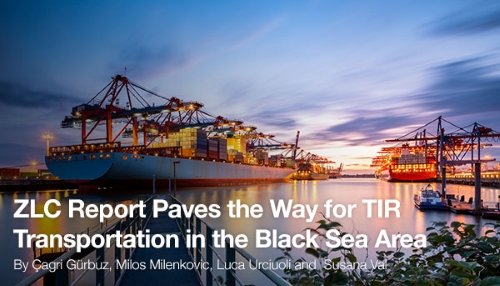 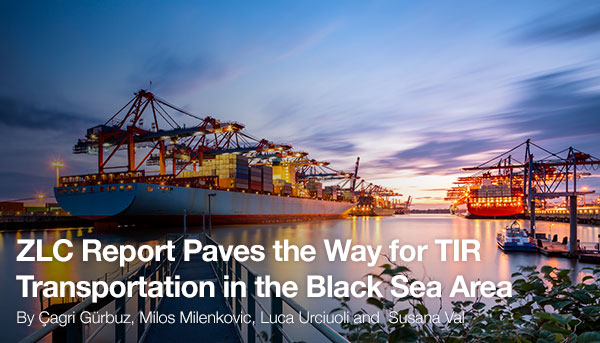 Strategically located at the crossroads of three continents, the Black Sea Economic Cooperation (BSEC) region is a critical link in many international supply chains. A study by the Zaragoza Logistics Center shows that companies can capture substantial savings and service improvements by adopting the TIR Carnet system when shipping freight intermodally across BSEC countries.

Twelve member states with a total population of some 340 million people make up the BSEC region. In combination, these countries have a GDP of about $3.4 trillion – or approximately 7.4% of the overall world economy.

There are various projects to increase trade volumes and reduce transit times for shipments in the region. For example, the Black Sea Ring Highway project is creating a four-lane highway system approximately 7,500 km in length that connects BSEC member states. Another project is strengthening links between the region’s ports, by reinforcing connections between the Black, Mediterranean and Caspian Seas. Beyond the region, BSEC figures largely in China’s Silk Road plans, a huge undertaking to expand transportation links between Asia and Europe.

The purpose of the ZLC report is to analyse and quantify the potential role of the United Nations TIR System (Transports Internationaux Routiers), in supporting the region’s trade growth by facilitating cross-border movements of intermodal shipments and export/import activities. The research focused on a route that takes in a representative sample of BSEC countries: Serbia, Bulgaria, Turkey, Georgia and Azerbaijan (see Figure 1). There are four border crossings on the route; enough to show the impact of the UN TIR system on a typical long distance intermodal shipment. 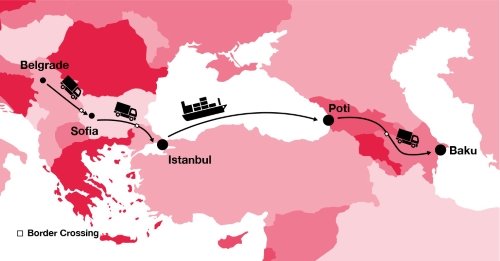 The UN TIR System is an international Customs transit system. Participating companies transport goods from a country of origin to a destination country in sealed compartments such as freight containers. These compartments are sealed at origin, making it less likely that they will be inspected or reducing inspection times at border crossings covered by the TIR system. In addition, operators can use a single financial guarantee to cover all customs duties and taxes levied in each transit country, streamlining the payments process. The system is operational in 58 countries including all BSEC countries.

As well as speeding up transit times and cutting administrative costs, the TIR system delivers benefits such as enhanced supply chain security; only approved carriers and vehicles that are sealed by customs participate in the system. The ZLC report examined current customs and border crossing procedures in the BSEC region, , and focusses on the potential benefits that an intermodal application of the TIR system could deliver.

To start with and to better understand the trade flows in the region, the study team built a model that simulates the movement of an intermodal shipment from Serbia to Azerbaijan (see Figure 1). A key goal was to estimate the reduction in total transit time as well as savings in related transportation/inventory/other costs for an intermodal TIR transport. In this respect a special focus was put on the transfer of loading units from one mode to another, and the increased complexity this introduces requires in terms of “slack time” in the logistics system.

The results of the research indicates that an intermodal use of the TIR system will indeed deliver significant benefits for stakeholders. For example, comparing shipments executed with and without a TIR Carnet showed that using the TIR intermodally can reduce transportation time by approximately four days. It also yielded direct and indirect cost savings in areas such as cargo holding costs. Another significant finding is that the reduced transit times led to an increase in container utilization of around 33%, because boxes are released sooner to carry more cargo.

The benefits mentioned above are based on the estimates the research team obtained through the analysis of secondary data and interviews about border crossings in general for intermodal transport. To provide highly accurate predictions on the use of intermodal TIR system for a specific route in the BSEC region, the team recommends further studies providing data, specifically on the impact of TIR Carnet on border crossing times.

The ZLC report was commissioned by the IRU, the global industry association for road transportation. It is hoped that the report’s findings will stimulate further discussion – and more importantly, provide a rationale for a well-run intermodal use of the TIR system in the BSEC region.