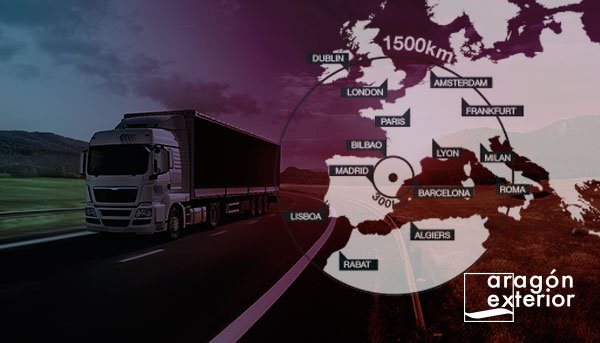 In recent years the Aragon region, and PLAZA (Logistics Platform of Zaragoza) in particular, has had some significant success in attracting the distribution activities of international companies and is naturally keen to build on this.

Aragon Exterior (AREX) is the government organisation that supports overseas companies wishing to establish and expand in Aragon. Based on an AREX initiative, Zaragoza Logistics Center (ZLC), conducted a benchmarking study to demonstrate the competitiveness of the region compared with other logistics hubs across Europe as an attractive location for international distribution activities.

There are many factors that may influence a company’s choice of location, not all of which are necessarily economic, or easily captured in a business case. These can range from large questions of International Relations, to ‘soft’ issues such as the attractiveness of an area to the families of senior staff who may be required to relocate (housing, schools, cuisine, even the weather). Even strictly business issues can be hard to quantify – for example the ‘cluster’ effect, whereby established locations for an activity are likely to enjoy a higher availability of support services, from staff training to material handling equipment maintenance. For this study the focus was on five readily quantifiable and comparable sets of factors: infrastructure (land and buildings costs), workforce costs and availability, transport costs, global trading provisions, and taxes.Chosen locations for comparison included the Rotterdam area of The Netherlands, the Hauts-de-France region centred on Lille, the Emilia-Romagna in Italy (Bologna) and North-Rhine Westphalia in Germany with emphasis on the important inland port of Duisburg. Besides these well-established logistics ‘clusters’ the focus was also on the Czech Republic as a potentially significant new competitor. Numerous databases and sources from organisations were used for this analysis, including Eurostat, World Bank, national statistical databases, real estate companies, port authorities, transport operators and international consultancies, as well as personal meetings with experts in transport and logistics.

The case for Aragon
On almost all of the factors reviewed, Aragon has an attractive case to make as a distribution location.

Considering land and property, the cost of acquiring land and building a warehouse in Aragon, whilst slightly higher than in the Czech Republic, is significantly lower than in Duisburg (and far lower than Rotterdam although the latter is not strictly comparable as only leaseholds are available). Renting a warehouse would cost, by the square metre, twice as much in Rotterdam as in Aragon, €70 against €35. Elsewhere the range is between €45 and €52 (and in several of the locations, availability is very limited).

Labour costs are also attractive. While costs in the Czech Republic are much lower (although increasing quite rapidly), monthly costs per employee in Aragon are, at €3,029, slightly lower than in Italy and significantly below Rotterdam or Duisburg, both of which top €4,000, while an employee in Hauts de France would cost €4,652. Admittedly that is not entirely a good thing, reflecting as it does relatively high unemployment in Spain, whereas unemployment in the Rotterdam area is around 5% and in the Czech Republic a negligible 3.1% – about as close to full employment as a modern economy gets. The available labour in Aragon has comparatively high skill levels, supported by logistics-focused education and training institutions. Zaragoza Logistics Center itself is a recognised international centre of excellence for research and education in logistics and supply chain management.

Transport costs are hard to compare, but if for example the inbound costs from Shanghai are considered the following conclusions come out. By air, costs to Aragon are below those to Bologna, and close to those of the Czech Republic. By sea, costs through Barcelona to Aragon are below those to Rotterdam (even accounting for a rail or road Barcelona-Zaragoza leg) or Bologna. Zaragoza has one of Europe’s biggest cargo airports, while Valencia and Bilbao are alternative seaports.

Looking at Customs procedures, Spain lags below the Netherlands and Germany for efficiency according to the World Bank, but they also note that Spain is continually improving. On taxation, corporation taxes are lower than those of France or Germany, although higher than in the Czech Republic, and Spain has the lowest level of Social Security taxes of all the regions analysed. Since 2015, provisions for deferment of VAT on goods for re-export are broadly similar to those of other EU countries.

The study demonstrates that there are very positive economic arguments for international business to choose Aragon as a distribution location. Not all is perfect: for example, rail and intermodal opportunities are limited by Spain’s historic choice of a different track gauge, although this is being addressed at national level. Nonetheless, there are sound business reasons to choose Aragon as an attractive location for international businesses to build and operate their distribution operations.