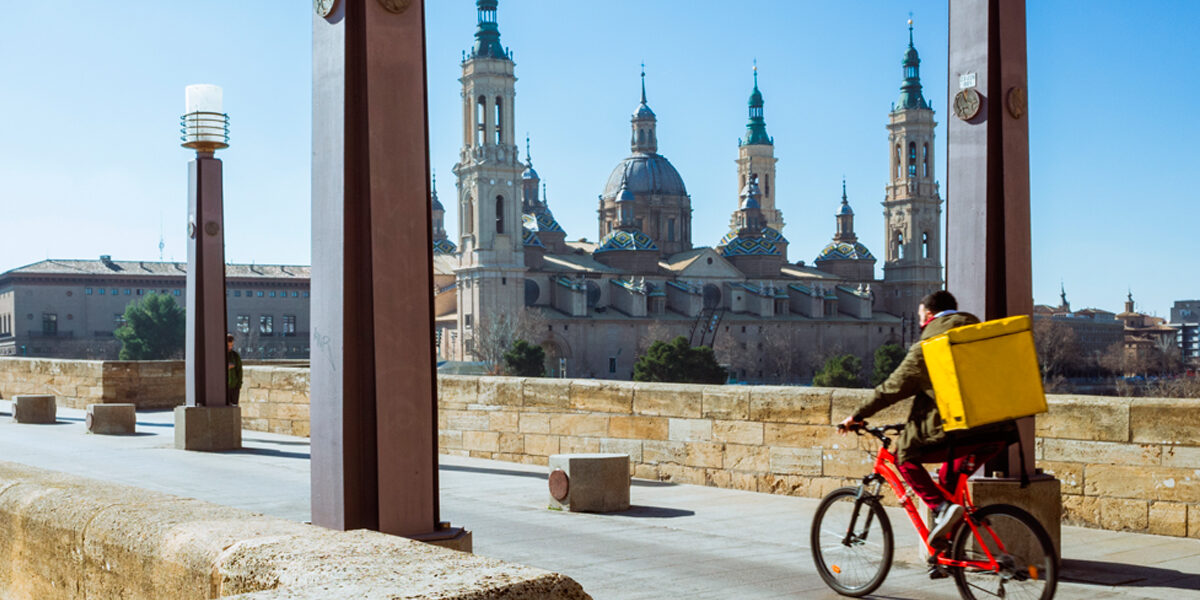 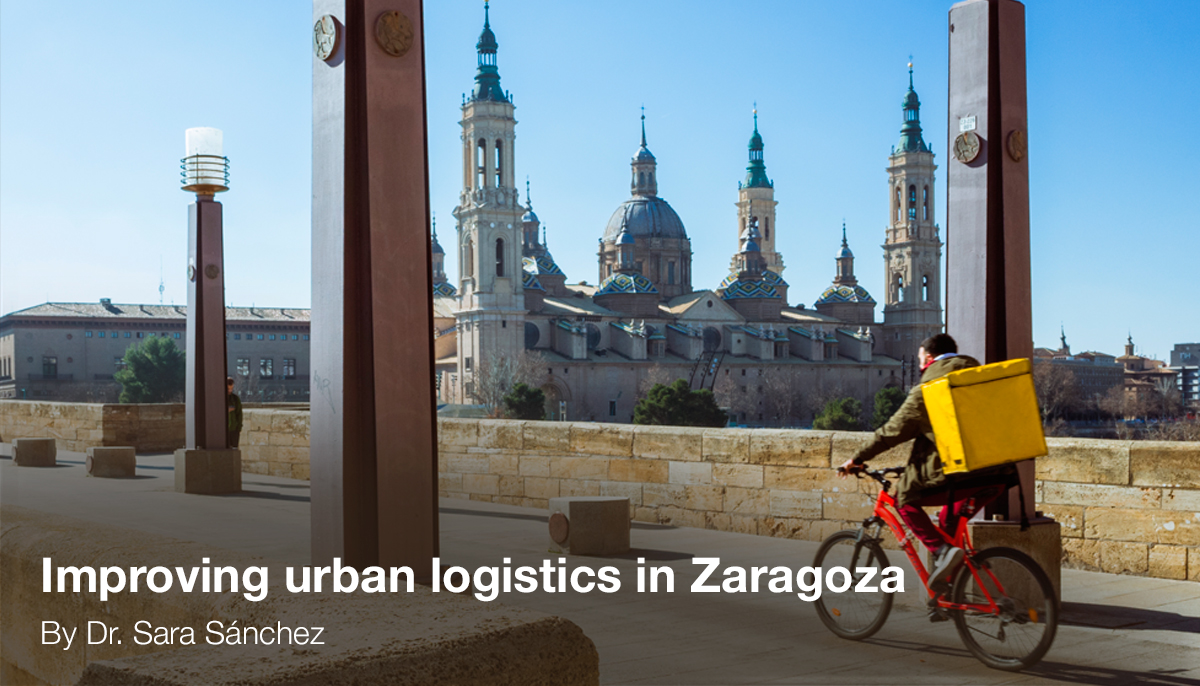 ZLC’s research interests span the globe, but we haven’t neglected our own ‘back yard’. We have recently been working in collaboration with Zaragoza Ciudad del Conocimiento (Zaragoza City of Knowledge – a private non-profit foundation aiming to spread at all levels in the city of Zaragoza, and beyond, the progress made by the Knowledge Society to construct a more participative, equalitarian, inclusive, and innovative city) on the design of a potential network of logistics hubs that could improve the way goods are delivered in our city.

Cities depend on freight movements, mostly by road – the making, buying, selling and exchange of goods is a major reason why cities exist, and further movements are generated in supporting residents and visitors and the services they depend on, from bars to waste disposal. But the downsides are well-known – carbon emissions, other pollutants and particulates, noise, and congestion, often in a street system that was never designed for modern traffic. With the increasing demand, even before the pandemic, for e-commerce deliveries to residential addresses and urban pick-up points, in ever shorter timescales, these problems if unaddressed can only increase.

Can we design a network of multipurpose urban hubs that will increase the efficiency of freight transport and the service levels it offers, while reducing the amount of movement (through holding stock closer to the point of consumption, creating higher load factors and better-planned routes), removing the largest and most polluting vehicles from the city’s streets, and replace the rest with low or zero-carbon alternatives?

We started by reviewing the ‘state of the art’ as demonstrated by urban hub developments elsewhere in Spain and across Europe, always bearing in mind that every city has its own unique characteristics – geography, street plans, population densities, locations of residential, business and mixed use areas and so on. This spatial analysis provides the groundwork for design of the proposed network structure, in terms of locations, and suggests the nature of the logistics processes that would link hubs and end users through the network, the types of vehicle that are best suited, and the KPIs that would show whether the proposed network will actually offer significant improvements. We also needed to look at the business models that might be using the network – private ownership, publicly owned but privately managed, various forms of collaborative or cooperative agreement, and so on. The current and potential future legislative environment is also relevant: rules on emissions, the creation of Low Emission Zones, vehicle weight restrictions, time limits for loading and unloading activities. Any proposed scheme would need to be compatible with Zaragoza City Council’s Sustainable Urban Mobility Plan (which covers passenger as well as freight traffic).

We carried out a SWOT analysis of the current situation, and mapped those hubs, convenience centres, pick-up lockers and the like that already exist. In practice we have focussed on logistics operator-owned hubs, the reasoning being that the convenience centres, as third parties to multiple operators, whilst a useful adjunct, can’t match the service levels provided by operator-owned centres and hubs and so these latter are where the biggest impact can be made and will have the dominant influence on any future network.

The network as proposed has three levels. Firstly, there are four locations defined as cross-docking centres, located close to the intersections of the Z40 ring road and the major entrance routes to the city. (Happily, this gives an even distribution, roughly North, South, East and West). This is as far as the heavy goods vehicles bringing freight in to the urban area would travel.

These cross-docking facilities would each serve a zone of the city through three to five urban hubs or micro-hubs, located so that as much of the population as feasible is within 5 minutes’ walk, say 400 metres, of an urban hub (or one of the collection points currently available). Electric vans would be used to transfer goods from the cross-docks to these hubs.

Finally, ‘last mile’ distribution to the end recipient would be carried out by bicycle, cargo-bike, scooter, small electric van, or indeed on foot, depending on the characteristics of each area and hub.

From our analysis, we estimate that around 27% of the urban population, (some 178,400 inhabitants) is within the ‘five minute’ zones of existing operator-owned centres. Our proposed network has very little overlap with these existing facilities – some areas of the city are already quite well served, others hardly at all – so the population covered by the new network, some 121,000 inhabitants or 18%, genuinely increases the proportion of the city’s people that can be served in this better, more efficient and less environmentally harmful, manner to between 40% and 45%.

Besides increasing the proportion of the population that are only five minutes away from their parcels, the proposed network has other advantages. It should be possible to increase the storage capacity of the system, and with each hub managed by a logistics operator, rather than through third parties, it will be possible to fine tune logistics and transport processes, and the type of vehicle used, to the specific needs and characteristics of the locality being served. We believe that returns management will also be improved, and there should in fact be less of this because the success rate for first-time delivery should be greater, which itself helps reduce the number of unnecessary journeys.

The use of non-polluting (electric or human) power from cross-dock to hub and on into the last mile, means that urban freight handled this way will generate no carbon or nitrogen oxides within the Z40 ring road, as well as being quieter.

A final advantage of this scheme is that, because each cross-dock and its associated hubs will serve distinct areas of the city, it would be possible to implement incrementally, starting with say one cross-dock and a couple of hubs, which would deliver their full range of benefits without being dependent on other parts of the scheme, and those benefits could be analysed and measured, and modifications made if necessary, before investing in the rest of the network.

Zaragoza City of Knowledge participated as technical expert during the guidance of the research implementation as well as offering urban data and the necessary tools for its subsequent analysis and visualisation, which offered added value to the research. In addition to the topological and hierarchical study of the metropolitan logistics distribution network, which serves as one of the criteria for locating micro hubs, the organisation was especially involved in analysing the effectiveness of the collection points service (own and convenience) of the main merchandise distribution operators within the area. This helps prioritise the implementation of the first multifunctional micro hubs (including collection points) of the study.